A Report by the OECD in Collaboration with Climate Policy Initiative 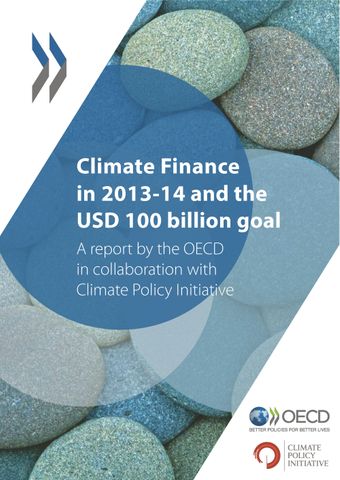 In 2009 developed countries committed to jointly mobilise USD 100 billion a year in climate finance by 2020 for climate action in developing countries. This report provides a status check on the level of climate finance mobilised by developed countries in 2013 and 2014, five years after this initial commitment was made at COP15 in Copenhagen. It shows that there has been significant progress in meeting this goal.The report aims to be transparent and rigorous in its assessment of the available data and underlying assumptions and methodologies, within the constraints of an aggregate reporting exercise. While methodological approaches and data collection efforts to support estimates such as this one are improving, there nevertheless remains significant work to be done to arrive at more complete and accurate estimates in the future.

Objective and background on the project

The estimate of climate finance was prepared at the request of the Peruvian and French governments in the context of their responsibilities as the presidencies of the UNFCCC Conference of Parties (COP). Climate finance flows are an important element of the negotiations in the lead up to COP21 in Paris, where countries are expected to finalise a new universal agreement on responses to climate change beyond 2020.

This OECD report, in collaboration with Climate Policy Initiative, provides an up-to-date estimate of public and private climate finance mobilised by developed countries towards their UNFCCC 2010 Cancun commitment, for climate action in developing countries. Public and private finance mobilised were estimated at USD 62 billion in 2014, up from USD 52 billion in 2013 and making an average of USD 57 billion annually over the 2013-14 period.

Released in advance of COP21 to increase transparency about progress towards the USD 100 billion goal, the report builds on other recent international efforts to improve the tracking of climate finance, including by the UNFCCC Standing Committee on Finance. The lessons learned from conducting this exercise may be helpful in informing efforts to further improve the transparency and comprehensiveness of climate finance measuring, tracking and reporting.

These estimates comprise public finance provided by donor governments through various instruments and institutions, including non-concessional loans. It also includes private funding for climate-related projects that has been directly mobilised by developed country public financial interventions. There is an acknowledgement of the important role played by capacity building and policy related interventions as well as enabling environments, although it is an outstanding challenge to account for these in quantitative terms.

Public finance, either bilateral or multilateral, accounted for more than 70% of the flows during 2013-14, while mobilised private finance made up more than 25% and export credits the remainder. Over three-quarters of total estimated climate finance was to support mitigation activities, with about one sixth going to support adaptation and a small share targeting both.

Why the OECD and CPI?

The OECD has extensive experience and expertise in tracking and measuring climate-related development finance, both through the OECD Development Assistance Committee (DAC) statistical framework and the OECD-hosted Research Collaborative on Tracking Private Climate Finance. Climate Policy Initiative brings substantial knowledge on the overall landscape on climate finance, and since 2011 has worked at the forefront of efforts to systematically track global climate finance, and to address related methodological and definitional issues.