Since the mid-1990s, India has raised GDP per capita by more than 5% per year, cut the incidence of poverty in half, and significantly decreased undernourishment. India is one of the fastest growing G20 economies, largely reflecting an ambitious reform agenda launched in 2014. India has emerged as a major exporter of several agricultural commodities, and has also been diversifying production towards high value pulses, fruits, vegetables, and livestock products.

While the sector has achieved much, many smallholders have not been able to exploit the opportunities opening up to them; they remain hampered by low productivity, an under-developed food processing and retail sector, and water and environmental degradation. In fact, India faces the same “triple challenge” as other countries: delivering safe and nutritious food to a growing population at affordable prices; providing a livelihood for farmers and others in the food chain; and overcoming severe resource and climate pressures.

Over the past several decades, agricultural policies in India have sought to ensure the well-being of both farmers and consumers. With about 80% of India’s poor living in rural areas, addressing widespread poverty and ensuring domestic food security are key objectives.

However, the ways in which policies to pursue these objectives have been designed and implemented have diminished their effectiveness.

On the one hand, restrictions stemming from agri-marketing regulations, together with export restrictions targeting several commodities, exert downward pressure on prices, with Indian farmers receiving prices lower than those prevailing in international markets across most commodities over the last two decades.

On the other hand, there are programmes that provide huge subsidies for farm inputs, such as fertilisers, electricity, and irrigation water. These domestic and trade policies have combined to reduce Indian farm revenue by an estimated 5.7% in the past three years—amounting to an ‘implicit taxation’ of about Rs 1.7 trillion per year—as the Organisation for Economic Co-operation and Development (OECD) and the Indian Council for Research on International Economic Relations (ICRIER) report in the Agricultural Policies in India 2018 study and the 2019 OECD Agricultural Policy Monitoring and Evaluation.

At the same time, funding for public services—such as physical infrastructure, inspection, research & development, and education and skills—that are essential to enable the long-term productivity and sustainability of the sector has not kept pace.
The government in India has set ambitious objectives for the sector, including to double farmers’ incomes by 2022. How can Indian governments—federal and state—strengthen the productivity and sustainability of Indian agriculture, and provide remunerative opportunities for farm households?

Ashok Gulati has recently written about farm policy developments in China, drawing lessons for India. Policy reform experiences in the European Union (EU) might also provide useful insights. Reforms to the EU’s Common Agricultural Policy (CAP) since the early 1990s have involved a gradual but consistent reduction of market regulation and border protection and the introduction of compensatory direct payments to producers. These payments were originally based on cultivated area or animal numbers, but became increasingly independent from production. Over the past 15 years, the share of support linked to production declined from 30% to 9% of farm revenue while compensatory payments increased from virtually zero to 8% of farm revenue. Producers acquired more flexibility to make their own production and trade decisions in response to market demand, independent of government intervention. These payments were subsequently adapted to address the specific needs of certain categories of farmers or regions, and conditions for receiving payments were introduced to ensure sustainable resource use.

Input subsidies have been reduced and, where they remain, are subject to environmental constraints on farm practices. In addition, new payments have been granted to farmers for providing valued environmental services, such as preservation of biodiversity. Today, nearly 50% of the support to producers is conditional on mandatory environmental constraints, and an additional 10% of support goes to voluntary agri-environmental schemes with conditions that go beyond the mandatory requirements. Investment support has also been made available to accompany structural adjustment, improve industry competitiveness, and foster rural development—for example, to facilitate diversification of activities. Importantly, EU investment in agricultural research and innovation has increased dramatically in recent years.

Experience in the EU and elsewhere shows that persistence pays. Meanwhile, as for the EU, the diversity of India’s regions and agriculture systems means that no single policy change or technology shift will get the country where it wants to be. But, reforming agri-marketing regulations and implementing direct support payments, where needed, can build on major initiatives already underway. These include the electronic national agricultural market (eNAM), the 2017 marketing model act, and the recently implemented direct cash transfers scheme to small-scale farmers.

More can and should be done. Scarce financial resources should be directed towards investment in public services that enable a productive, sustainable, and resilient food and agriculture sector. Doing so would require strengthening the institutional framework; eliminating duplication and fragmentation is a pre-requisite to ensuring coherent policy packages are developed and consistently implemented.

Achieving the Sustainable Development Goals and addressing the “triple challenge” will require new policy directions in India, as elsewhere. India has already shown it has the capacity to achieve high levels of growth and poverty reduction; with the right policy incentives, India’s food and agriculture system can work better for all. 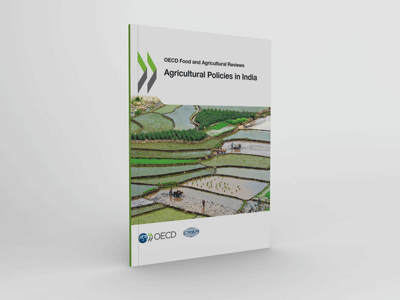 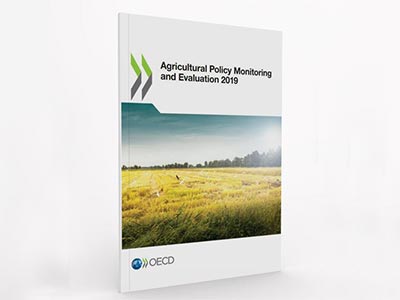 This annual report monitors and evaluates agricultural policies spanning all 6 continents, including the 36 OECD countries, the 5 non-OECD EU Member States, and 12 emerging economies. It is a unique source of up-to date estimates of support to agriculture.